says the Lord Yahweh, Woe to the foolish prophets, who follow their own spirit, and have seen nothing!

Ezekiel 13 [1.] Yahweh’s word came to me, saying, Son of man, prophesy against the prophets of Israel who prophesy, and say to those who prophesy out of their own heart, Hear Yahweh’s word: Thus says the Lord Yahweh, Woe to the foolish prophets, who follow their own spirit, and have seen nothing! Israel, your prophets have been like foxes in the waste places.

Ezekiel 13 [5.] You have not gone up into the gaps, neither built up the wall for the house of Israel, to stand in the battle in the day of Yahweh. They have seen falsehood and lying divination, who say, Yahweh says; but Yahweh has not sent them: and they have made men to hope that the word would be confirmed. Haven’t you seen a false vision, and haven’t you spoken a lying divination, in that you say, Yahweh says; but I have not spoken? Therefore thus says the Lord Yahweh: Because you have spoken falsehood, and seen lies, therefore, behold, I am against you, says the Lord Yahweh. My hand shall be against the prophets who see false visions, and who divine lies: they shall not be in the council of my people, neither shall they be written in the writing of the house of Israel, neither shall they enter into the land of Israel; and you shall know that I am the Lord Yahweh.


delusion
PIB Scriptures are derived from the World English Bible 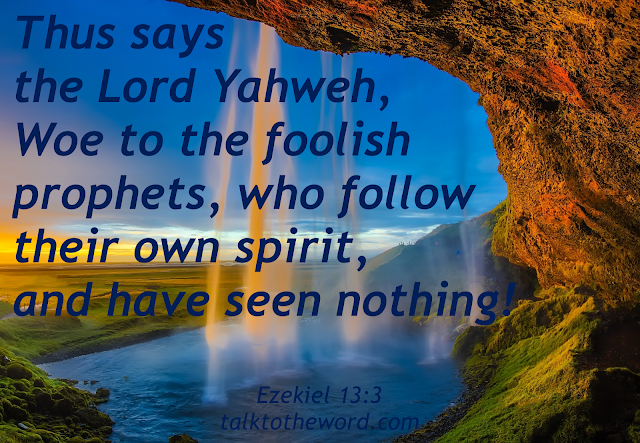