hands were heavy; and they took a stone, and put it under him, and he sat on it. Aaron and Hur held up his hands, the one on the one side, and the other on the other side. His hands were steady until sunset. 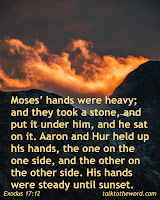 Exodus 17 [5.] Yahweh said to Moses, “Walk on before the people, and take the elders of Israel with you, and take the rod in your hand with which you struck the Nile, and go. Behold, I will stand before you there on the rock in Horeb. You shall strike the rock, and water will come out of it, that the people may drink.” Moses did so in the sight of the elders of Israel. He called the name of the place Massah,[a] and Meribah,[b] because the children of Israel quarreled, and because they tested Yahweh, saying, “Is Yahweh among us, or not?”

Exodus 17 [8.] Then Amalek came and fought with Israel in Rephidim. Moses said to Joshua, “Choose men for us, and go out, fight with Amalek. Tomorrow I will stand on the top of the hill with God’s rod in my hand.” So Joshua did as Moses had told him, and fought with Amalek; and Moses, Aaron, and Hur went up to the top of the hill. When Moses held up his hand, Israel prevailed. When he let down his hand, Amalek prevailed. But Moses’ hands were heavy; and they took a stone, and put it under him, and he sat on it. Aaron and Hur held up his hands, the one on the one side, and the other on the other side. His hands were steady until sunset. Joshua defeated Amalek and his people with the edge of the sword. Yahweh said to Moses, “Write this for a memorial in a book, and rehearse it in the ears of Joshua: that I will utterly blot out the memory of Amalek from under the sky.” Moses built an altar, and called its name Yahweh our Banner.[c] He said, “Yah has sworn: ‘Yahweh will have war with Amalek from generation to generation.’”

Exodus 18 [1.] Now Jethro, the priest of Midian, Moses’ father-in-law, heard of all that God had done for Moses, and for Israel his people, how that Yahweh had brought Israel out of Egypt. Jethro, Moses’ father-in-law, received Zipporah, Moses’ wife, after he had sent her away, and her two sons. The name of one son was Gershom,[a] for Moses said, “I have lived as a foreigner in a foreign land”. The name of the other was Eliezer,[b] for he said, “My father’s God was my help and delivered me from Pharaoh’s sword.” Jethro, Moses’ father-in-law, came with his sons and his wife to Moses into the wilderness where he was encamped, at the Mountain of God. He said to Moses, “I, your father-in-law Jethro, have come to you with your wife, and her two sons with her.”


team
PIB Scriptures are derived from the World English Bible 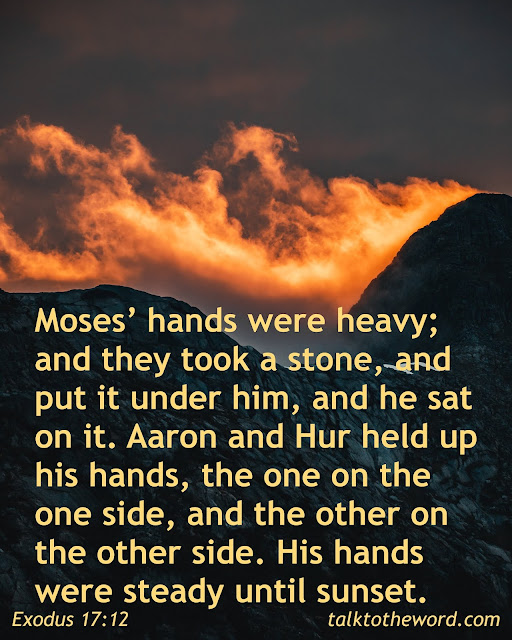