law shall be to him who is born at home, and to the stranger who lives as a foreigner among you.

Exodus 12 [37.] The children of Israel traveled from Rameses to Succoth, about six hundred thousand on foot who were men, besides children. A mixed multitude went up also with them, with flocks, herds, and even very much livestock. They baked unleavened cakes of the dough which they brought out of Egypt; for it wasn’t leavened, because they were thrust out of Egypt, and couldn’t wait, and they had not prepared any food for themselves. Now the time that the children of Israel lived in Egypt was four hundred thirty years. At the end of four hundred thirty years, to the day, all of Yahweh’s armies went out from the land of Egypt. It is a night to be much observed to Yahweh for bringing them out from the land of Egypt. This is that night of Yahweh, to be much observed of all the children of Israel throughout their generations.

Exodus 12 [43.] Yahweh said to Moses and Aaron, “This is the ordinance of the Passover. No foreigner shall eat of it, but every man’s servant who is bought for money, when you have circumcised him, then shall he eat of it. A foreigner and a hired servant shall not eat of it. It must be eaten In one house. You shall not carry any of the meat outside of the house. Do not break any of its bones. All the congregation of Israel shall keep it. When a stranger shall live as a foreigner with you, and will keep the Passover to Yahweh, let all his males be circumcised, and then let him come near and keep it; and he shall be as one who is born in the land: but no uncircumcised person shall eat of it. One law shall be to him who is born at home, and to the stranger who lives as a foreigner among you.” All the children of Israel did so. As Yahweh commanded Moses and Aaron, so they did. That same day, Yahweh brought the children of Israel out of the land of Egypt by their armies.

Exodus 13 [1.] Yahweh spoke to Moses, saying, “Sanctify to me all the firstborn, whatever opens the womb among the children of Israel, both of man and of animal. It is mine.” 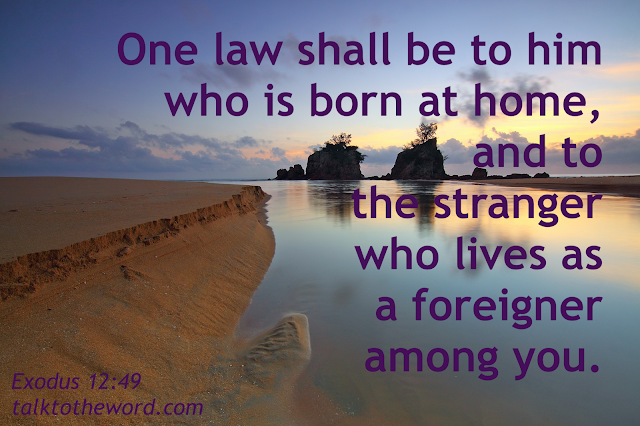