the spirit of the ruler rises up against you, don’t leave your place; for gentleness lays great offences to rest.


Ecclesiastes 9 [13.] I have also seen wisdom under the sun in this way, and it seemed great to me. There was a little city, and few men within it; and a great king came against it, besieged it, and built great bulwarks against it. Now a poor wise man was found in it, and he by his wisdom delivered the city; yet no man remembered that same poor man. Then I said, “Wisdom is better than strength.” Nevertheless the poor man’s wisdom is despised, and his words are not heard. The words of the wise heard in quiet are better than the cry of him who rules among fools. Wisdom is better than weapons of war; but one sinner destroys much good.

Ecclesiastes 10 [1.] Dead flies cause the oil of the perfumer to produce an evil odor;
so does a little folly outweigh wisdom and honor.
A wise man’s heart is at his right hand,
but a fool’s heart at his left. Yes also, when the fool walks by the way, his understanding fails him, and he says to everyone that he is a fool. If the spirit of the ruler rises up against you, don’t leave your place; for gentleness lays great offenses to rest.

Ecclesiastes 10 [5.] There is an evil which I have seen under the sun, the sort of error which proceeds from the ruler. Folly is set in great dignity, and the rich sit in a low place. I have seen servants on horses, and princes walking like servants on the earth. He who digs a pit may fall into it; and whoever breaks through a wall may be bitten by a snake. Whoever carves out stones may be injured by them. Whoever splits wood may be endangered thereby. If the ax is blunt, and one doesn’t sharpen the edge, then he must use more strength; but skill brings success. 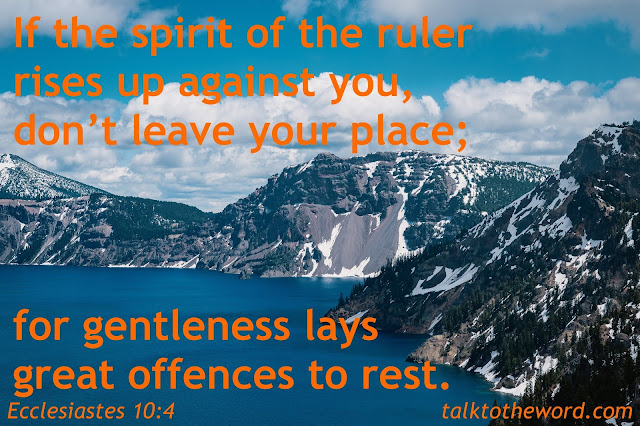