caused him to suck honey out of the rock, oil out of the flinty rock. 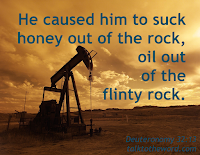 Deuteronomy 32 [10.] He found him in a desert land,
in the waste howling wilderness.
He surrounded him.
He cared for him.
He kept him as the apple of his eye.
As an eagle that stirs up her nest,
that flutters over her young,
he spread abroad his wings,
he took them,
he bore them on his feathers.
Yahweh alone led him.
There was no foreign god with him.
He made him ride on the high places of the earth.
He ate the increase of the field.
He caused him to suck honey out of the rock,
oil out of the flinty rock;
butter from the herd, and milk from the flock,
with fat of lambs,
rams of the breed of Bashan, and goats,
with the finest of the wheat.
From the blood of the grape, you drank wine.
But Jeshurun grew fat, and kicked.
You have grown fat.
You have grown thick.
You have become sleek.
Then he abandoned God who made him,
and rejected the Rock of his salvation.
They moved him to jealousy with strange gods.
They provoked him to anger with abominations.
They sacrificed to demons, not God,
to gods that they didn’t know,
to new gods that came up recently,
which your fathers didn’t dread.
Of the Rock who became your father, you are unmindful,
and have forgotten God who gave you birth.
Yahweh saw and abhorred,
because of the provocation of his sons and his daughters.


palaeontology
PIB Scriptures are derived from the World English Bible 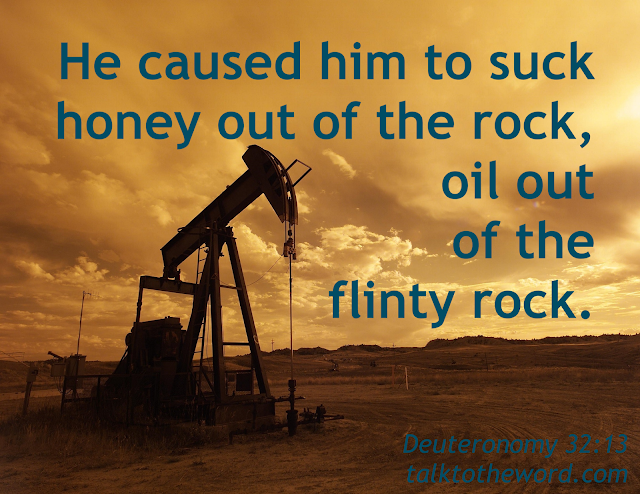