presidents and the satraps sought to find occasion against Daniel as touching the kingdom; but they could find no occasion nor fault, because he was faithful, neither was there any error or fault found in him.

Daniel 5 [25.] This is the writing that was inscribed: MENE, MENE, TEKEL, UPHARSIN. This is the interpretation of the thing: MENE; God has numbered your kingdom, and brought it to an end; TEKEL; you are weighed in the balances, and are found wanting. PERES; your kingdom is divided, and given to the Medes and Persians. Then commanded Belshazzar, and they clothed Daniel with purple, and put a chain of gold about his neck, and made proclamation concerning him, that he should be the third ruler in the kingdom. [30.] In that night Belshazzar the Chaldean King was slain. Darius the Mede received the kingdom, being about sixty-two years old.

Daniel 6 [1.] It pleased Darius to set over the kingdom one hundred twenty satraps, who should be throughout the whole kingdom; and over them three presidents, of whom Daniel was one; that these satraps might give account to them, and that the king should have no damage. Then this Daniel was distinguished above the presidents and the satraps, because an excellent spirit was in him; and the king thought to set him over the whole realm. Then the presidents and the satraps sought to find occasion against Daniel as touching the kingdom; but they could find no occasion nor fault, because he was faithful, neither was there any error or fault found in him.

Daniel 6 [5.] Then these men said, We shall not find any occasion against this Daniel, except we find it against him concerning the law of his God. Then these presidents and satraps assembled together to the king, and said thus to him, King Darius, live forever. All the presidents of the kingdom, the deputies and the satraps, the counselors and the governors, have consulted together to establish a royal statute, and to make a strong decree, that whoever shall ask a petition of any god or man for thirty days, except of you, O king, he shall be cast into the den of lions. Now, O king, establish the decree, and sign the writing, that it not be changed, according to the law of the Medes and Persians, which doesn’t alter. Therefore king Darius signed the writing and the decree. 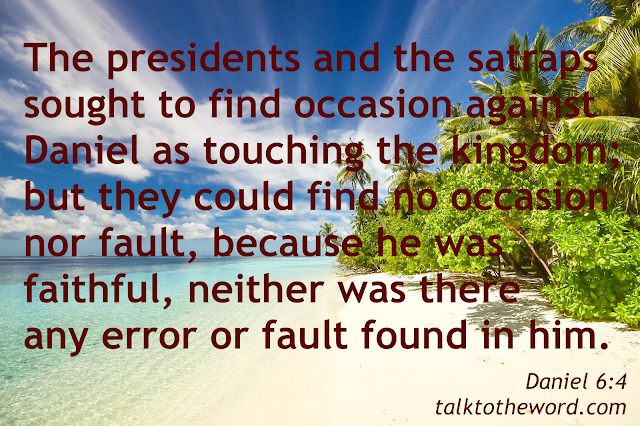