day, in the temple and at home, they never stopped teaching and preaching Jesus, the Christ.

Acts 5 [33.] But they, when they heard this, were cut to the heart, and determined to kill them. But one stood up in the council, a Pharisee named Gamaliel, a teacher of the law, honored by all the people, and commanded to put the apostles out for a little while. He said to them, “You men of Israel, be careful concerning these men, what you are about to do. For before these days Theudas rose up, making himself out to be somebody; to whom a number of men, about four hundred, joined themselves: who was slain; and all, as many as obeyed him, were dispersed, and came to nothing. After this man, Judas of Galilee rose up in the days of the enrollment, and drew away some people after him. He also perished, and all, as many as obeyed him, were scattered abroad. Now I tell you, withdraw from these men, and leave them alone. For if this counsel or this work is of men, it will be overthrown. But if it is of God, you will not be able to overthrow it, and you would be found even to be fighting against God!”

Acts 5 [40.] They agreed with him. Summoning the apostles, they beat them and commanded them not to speak in the name of Jesus, and let them go. They therefore departed from the presence of the council, rejoicing that they were counted worthy to suffer dishonor for Jesus’ name.

Acts 5 [42.] Every day, in the temple and at home, they never stopped teaching and preaching Jesus, the Christ.

Acts 6 [1.] Now in those days, when the number of the disciples was multiplying, a complaint arose from the Hellenists[a] against the Hebrews, because their widows were neglected in the daily service. The twelve summoned the multitude of the disciples and said, “It is not appropriate for us to forsake the word of God and serve tables. Therefore select from among you, brothers, seven men of good report, full of the Holy Spirit and of wisdom, whom we may appoint over this business. But we will continue steadfastly in prayer and in the ministry of the word.”


evangelize
PIB Scriptures are derived from the World English Bible 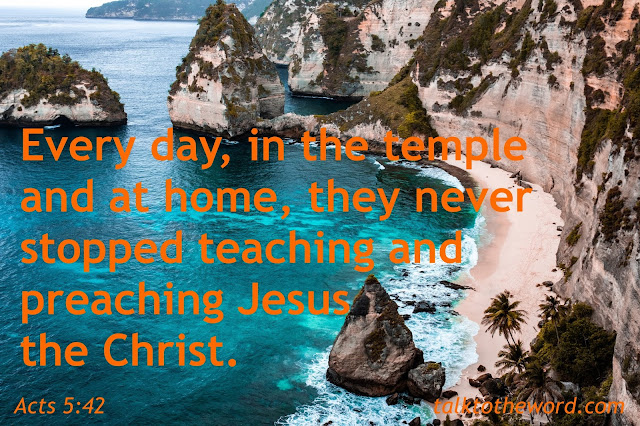