came and told them, “Behold, the men whom you put in prison are in the temple, standing and teaching the people.” 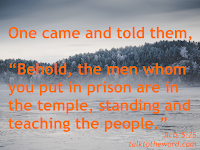 Acts 5 [21.] When they heard this, they entered into the temple about daybreak, and taught. But the high priest came, and those who were with him, and called the council together, and all the senate of the children of Israel, and sent to the prison to have them brought. But the officers who came didn’t find them in the prison. They returned and reported, “We found the prison shut and locked, and the guards standing before the doors, but when we opened them, we found no one inside!”

Acts 5 [24.] Now when the high priest, the captain of the temple, and the chief priests heard these words, they were very perplexed about them and what might become of this. One came and told them, “Behold, the men whom you put in prison are in the temple, standing and teaching the people.” Then the captain went with the officers, and brought them without violence, for they were afraid that the people might stone them.

Acts 5 [27.] When they had brought them, they set them before the council. The high priest questioned them, saying, “Didn’t we strictly command you not to teach in this name? Behold, you have filled Jerusalem with your teaching, and intend to bring this man’s blood on us.”


jail
PIB Scriptures are derived from the World English Bible 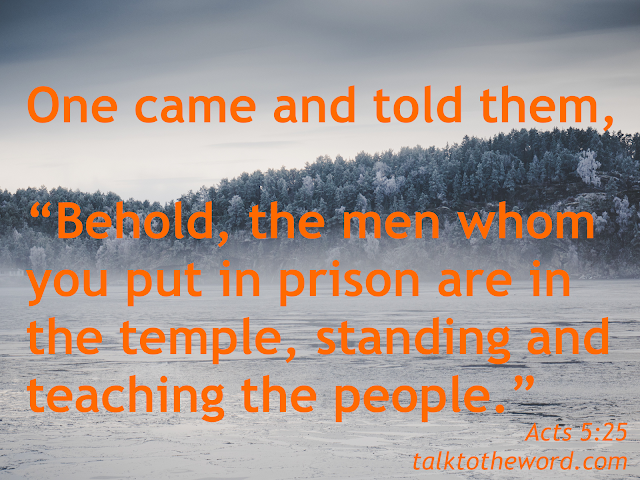