when they saw the boldness of Peter and John, and had perceived that they were unlearned and ignorant men, they marveled. They recognized that they had been with Jesus.

Acts 4 [5.] In the morning, their rulers, elders, and scribes were gathered together in Jerusalem. Annas the high priest was there, with Caiaphas, John, Alexander, and as many as were relatives of the high priest. When they had stood them in the middle of them, they inquired, “By what power, or in what name, have you done this?”

Acts 4 [8.] Then Peter, filled with the Holy Spirit, said to them, “You rulers of the people, and elders of Israel, if we are examined today concerning a good deed done to a crippled man, by what means this man has been healed, be it known to you all, and to all the people of Israel, that in the name of Jesus Christ of Nazareth, whom you crucified, whom God raised from the dead, in him does this man stand here before you whole. He is ‘the stone which was regarded as worthless by you, the builders, which has become the head of the corner.’[a] There is salvation in none other, for neither is there any other name under heaven, that is given among men, by which we must be saved!”

Acts 4 [13.] Now when they saw the boldness of Peter and John, and had perceived that they were unlearned and ignorant men, they marveled. They recognized that they had been with Jesus. Seeing the man who was healed standing with them, they could say nothing against it. But when they had commanded them to go aside out of the council, they conferred among themselves, saying, “What shall we do to these men? Because indeed a notable miracle has been done through them, as can be plainly seen by all who dwell in Jerusalem, and we can’t deny it. But so that this spreads no further among the people, let’s threaten them, that from now on they don’t speak to anyone in this name.” They called them, and commanded them not to speak at all nor teach in the name of Jesus. 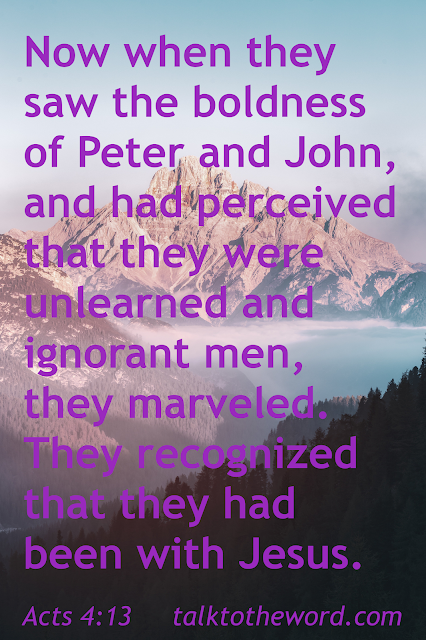