they had arrived, and had gathered the assembly together, they reported all the things that God had done with them, and that he had opened a door of faith to the nations.

Acts 14 [20.] But as the disciples stood around him, he rose up, and entered into the city. On the next day he went out with Barnabas to Derbe. When they had preached the Good News to that city, and had made many disciples, they returned to Lystra, Iconium, and Antioch, confirming the souls of the disciples, exhorting them to continue in the faith, and that through many afflictions we must enter into God’s Kingdom. When they had appointed elders for them in every assembly, and had prayed with fasting, they commended them to the Lord, on whom they had believed.

Acts 14 [24.] They passed through Pisidia, and came to Pamphylia. When they had spoken the word in Perga, they went down to Attalia. From there they sailed to Antioch, from where they had been committed to the grace of God for the work which they had fulfilled. When they had arrived, and had gathered the assembly together, they reported all the things that God had done with them, and that he had opened a door of faith to the nations. They stayed there with the disciples for a long time.

Acts 15 [1.] Some men came down from Judea and taught the brothers, “Unless you are circumcised after the custom of Moses, you can’t be saved.” Therefore when Paul and Barnabas had no small discord and discussion with them, they appointed Paul and Barnabas, and some others of them, to go up to Jerusalem to the apostles and elders about this question. They, being sent on their way by the assembly, passed through both Phoenicia and Samaria, declaring the conversion of the Gentiles. They caused great joy to all the brothers.[a] When they had come to Jerusalem, they were received by the assembly and the apostles and the elders, and they reported all things that God had done with them.

a. Acts 15:3 The word for “brothers” here and where the context allows may also be correctly translated “brothers and sisters” or “siblings.”


exit
PIB Scriptures are derived from the World English Bible 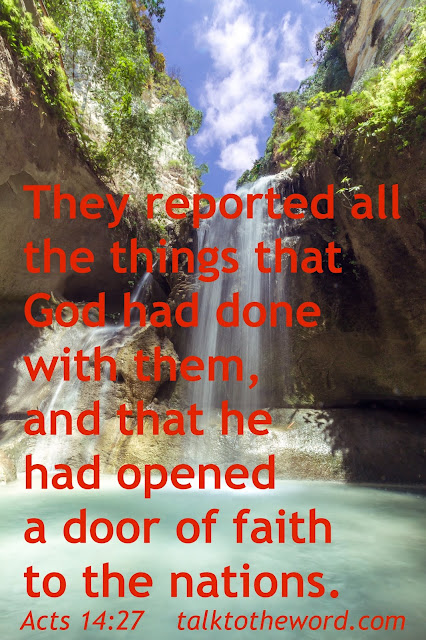