didn’t leave himself without witness, in that he did good and gave you rains from the sky and fruitful seasons, filling our hearts with food and gladness.

Acts 14 [8.] At Lystra a certain man sat, impotent in his feet, a cripple from his mother’s womb, who never had walked. He was listening to Paul speaking, who, fastening eyes on him, and seeing that he had faith to be made whole, said with a loud voice, “Stand upright on your feet!” He leaped up and walked. When the multitude saw what Paul had done, they lifted up their voice, saying in the language of Lycaonia, “The gods have come down to us in the likeness of men!” They called Barnabas “Jupiter”, and Paul “Mercury”, because he was the chief speaker. The priest of Jupiter, whose temple was in front of their city, brought oxen and garlands to the gates, and would have made a sacrifice along with the multitudes.

Acts 14 [14.] But when the apostles, Barnabas and Paul, heard of it, they tore their clothes, and sprang into the multitude, crying out, “Men, why are you doing these things? We also are men of like passions with you, and bring you good news, that you should turn from these vain things to the living God, who made the sky and the earth and the sea, and all that is in them; who in the generations gone by allowed all the nations to walk in their own ways. Yet he didn’t leave himself without witness, in that he did good and gave you[b] rains from the sky and fruitful seasons, filling our hearts with food and gladness.”

Acts 14 [18.] Even saying these things, they hardly stopped the multitudes from making a sacrifice to them. But some Jews from Antioch and Iconium came there, and having persuaded the multitudes, they stoned Paul, and dragged him out of the city, supposing that he was dead.

Acts 14 [20.] But as the disciples stood around him, he rose up, and entered into the city. On the next day he went out with Barnabas to Derbe. When they had preached the Good News to that city, and had made many disciples, they returned to Lystra, Iconium, and Antioch, confirming the souls of the disciples, exhorting them to continue in the faith, and that through many afflictions we must enter into God’s Kingdom. When they had appointed elders for them in every assembly, and had prayed with fasting, they commended them to the Lord, on whom they had believed. 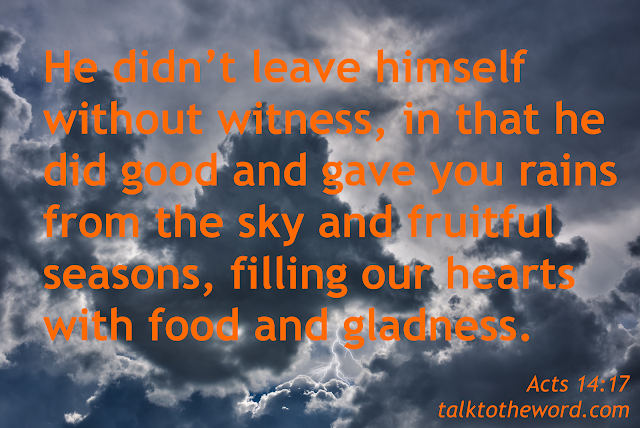