so has the Lord commanded us, saying, ‘I have set you as a light for the Gentiles, that you should bring salvation to the uttermost parts of the earth.’ 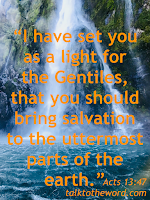 Acts 13 [42.] So when the Jews went out of the synagogue, the Gentiles begged that these words might be preached to them the next Sabbath. Now when the synagogue broke up, many of the Jews and of the devout proselytes followed Paul and Barnabas; who, speaking to them, urged them to continue in the grace of God. The next Sabbath almost the whole city was gathered together to hear the word of God. But when the Jews saw the multitudes, they were filled with jealousy, and contradicted the things which were spoken by Paul, and blasphemed.

Acts 13 [46.] Paul and Barnabas spoke out boldly, and said, “It was necessary that God’s word should be spoken to you first. Since indeed you thrust it from you, and judge yourselves unworthy of eternal life, behold, we turn to the Gentiles. For so has the Lord commanded us, saying,

‘I have set you as a light for the Gentiles,
that you should bring salvation to the uttermost parts of the earth.’” [j]

Acts 13 [48.] As the Gentiles heard this, they were glad, and glorified the word of God. As many as were appointed to eternal life believed. The Lord’s word was spread abroad throughout all the region. But the Jews stirred up the devout and prominent women and the chief men of the city, and stirred up a persecution against Paul and Barnabas, and threw them out of their borders. But they shook off the dust of their feet against them, and came to Iconium. The disciples were filled with joy with the Holy Spirit. 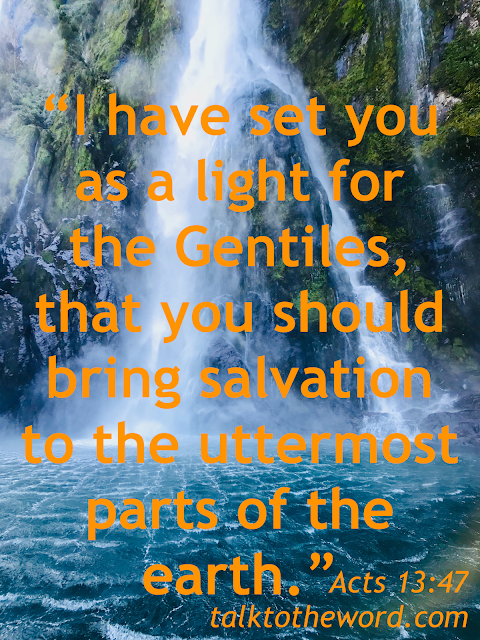