also showed himself alive after he suffered, by many proofs, appearing to them over a period of forty days, and speaking about God’s Kingdom. 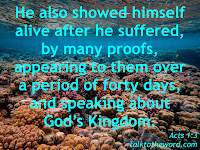 Acts 1 [1.] The first book I wrote, Theophilus, concerned all that Jesus began both to do and to teach, until the day in which he was received up, after he had given commandment through the Holy Spirit to the apostles whom he had chosen. To these he also showed himself alive after he suffered, by many proofs, appearing to them over a period of forty days, and speaking about God’s Kingdom. Being assembled together with them, he commanded them, “Don’t depart from Jerusalem, but wait for the promise of the Father, which you heard from me. For John indeed baptized in water, but you will be baptized in the Holy Spirit not many days from now.”

Acts 1 [6.] Therefore when they had come together, they asked him, “Lord, are you now restoring the kingdom to Israel?”

Acts 1 [7.] He said to them, “It isn’t for you to know times or seasons which the Father has set within his own authority. But you will receive power when the Holy Spirit has come upon you. You will be witnesses to me in Jerusalem, in all Judea and Samaria, and to the uttermost parts of the earth.”


live
PIB Scriptures are derived from the World English Bible 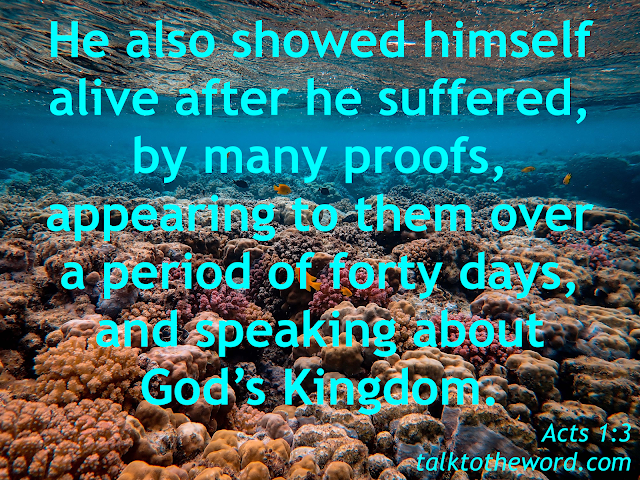