and all the house of Israel played before Yahweh with all kinds of instruments made of cypress wood, with harps, with stringed instruments, with tambourines, with castanets, and with cymbals. 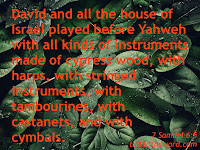 2 Samuel 6 [1.] David again gathered together all the chosen men of Israel, thirty thousand. David arose, and went with all the people who were with him, from Baale Judah, to bring up from there God’s ark, which is called by the Name, even the name of Yahweh of Armies who sits above the cherubim. They set God’s ark on a new cart, and brought it out of Abinadab’s house that was on the hill; and Uzzah and Ahio, the sons of Abinadab, drove the new cart. They brought it out of Abinadab’s house, which was in the hill, with God’s ark; and Ahio went before the ark.

2 Samuel 6 [5.] David and all the house of Israel played before Yahweh with all kinds of instruments made of cypress wood, with harps, with stringed instruments, with tambourines, with castanets, and with cymbals. When they came to the threshing floor of Nacon, Uzzah reached for God’s ark, and took hold of it; for the cattle stumbled. Yahweh’s anger burned against Uzzah; and God struck him there for his error; and he died there by God’s ark. David was displeased, because Yahweh had broken out against Uzzah; and he called that place Perez Uzzah,[a] to this day. David was afraid of Yahweh that day; and he said, “How could Yahweh’s ark come to me?” So David would not move Yahweh’s ark to be with him in David’s city; but David carried it aside into Obed-Edom the Gittite’s house. Yahweh’s ark remained in Obed-Edom the Gittite’s house three months; and Yahweh blessed Obed-Edom and all his house.

2 Samuel 6 [12.] King David was told, “Yahweh has blessed the house of Obed-Edom, and all that belongs to him, because of God’s ark.” So David went and brought up God’s ark from the house of Obed-Edom into David’s city with joy. When those who bore Yahweh’s ark had gone six paces, he sacrificed an ox and a fattened calf. David danced before Yahweh with all his might; and David was clothed in a linen ephod. So David and all the house of Israel brought up Yahweh’s ark with shouting, and with the sound of the trumpet. 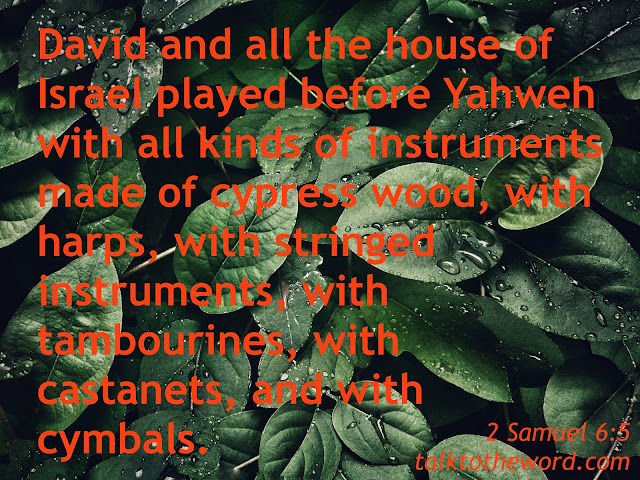