shall not forget the covenant that I have made with you. You shall not fear other gods.

2 Kings 17 [28.] So one of the priests whom they had carried away from Samaria came and lived in Bethel, and taught them how they should fear Yahweh. However every nation made gods of their own, and put them in the houses of the high places which the Samaritans had made, every nation in their cities in which they lived. The men of Babylon made Succoth Benoth, and the men of Cuth made Nergal, and the men of Hamath made Ashima, and the Avvites made Nibhaz and Tartak; and the Sepharvites burnt their children in the fire to Adrammelech and Anammelech, the gods of Sepharvaim. So they feared Yahweh, and also made from among themselves priests of the high places for themselves, who sacrificed for them in the houses of the high places. They feared Yahweh, and also served their own gods, after the ways of the nations from among whom they had been carried away. To this day they do what they did before. They don’t fear Yahweh, and they do not follow the statutes, or the ordinances, or the law, or the commandment which Yahweh commanded the children of Jacob, whom he named Israel; [35.] with whom Yahweh had made a covenant, and commanded them, saying, “You shall not fear other gods, nor bow yourselves to them, nor serve them, nor sacrifice to them; but you shall fear Yahweh, who brought you up out of the land of Egypt with great power and with an outstretched arm, and you shall bow yourselves to him, and you shall sacrifice to him. The statutes and the ordinances, and the law and the commandment, which he wrote for you, you shall observe to do forever more. You shall not fear other gods. You shall not forget the covenant that I have made with you. You shall not fear other gods. But you shall fear Yahweh your God, and he will deliver you out of the hand of all your enemies.” [40.] However they did not listen, but they did what they did before. So these nations feared Yahweh, and also served their engraved images. Their children likewise, and their children’s children, as their fathers did, so they do to this day.


keepsake
PIB Scriptures are derived from the World English Bible 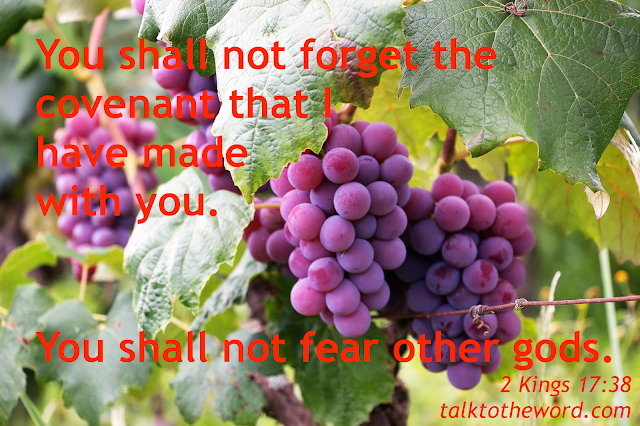