2 Kings 14 [7.] He killed ten thousand Edomites in the Valley of Salt, and took Sela by war, and called its name Joktheel, to this day. Then Amaziah sent messengers to Jehoash, the son of Jehoahaz son of Jehu, king of Israel, saying, “Come, let us look one another in the face.”

2 Kings 14 [9.] Jehoash the king of Israel sent to Amaziah king of Judah, saying, “The thistle that was in Lebanon sent to the cedar that was in Lebanon, saying, ‘Give your daughter to my son as wife. Then a wild animal that was in Lebanon passed by, and trampled down the thistle. You have indeed struck Edom, and your heart has lifted you up. Enjoy the glory of it, and stay at home; for why should you meddle to your harm, that you fall, even you, and Judah with you?’” But Amaziah would not listen. So Jehoash king of Israel went up; and he and Amaziah king of Judah looked one another in the face at Beth Shemesh, which belongs to Judah. Judah was defeated by Israel; and each man fled to his tent. Jehoash king of Israel took Amaziah king of Judah, the son of Jehoash the son of Ahaziah, at Beth Shemesh, and came to Jerusalem, and broke down the wall of Jerusalem from the gate of Ephraim to the corner gate, four hundred cubits.[a] He took all the gold and silver, and all the vessels that were found in Yahweh’s house and in the treasures of the king’s house, the hostages also, and returned to Samaria.


imagination
PIB Scriptures are derived from the World English Bible 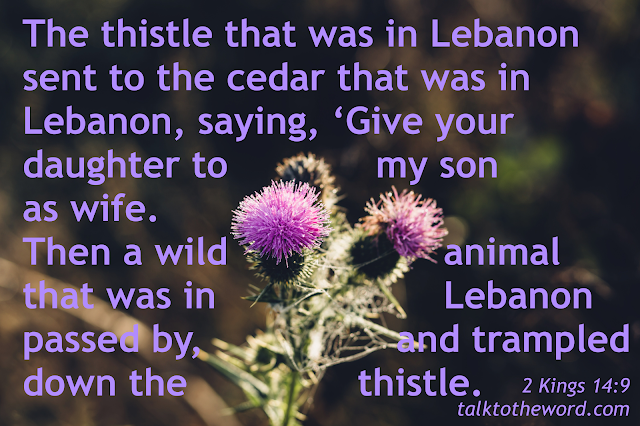