you abound in everything, in faith, utterance, knowledge, all earnestness, and in your love to us, see that you also abound in this grace.

2 Corinthians 8 [1.] Moreover, brothers, we make known to you the grace of God which has been given in the assemblies of Macedonia; how that in much proof of affliction the abundance of their joy and their deep poverty abounded to the riches of their liberality. For according to their power, I testify, yes and beyond their power, they gave of their own accord, begging us with much entreaty to receive this grace and the fellowship in the service to the saints.

2 Corinthians 8 [5.] This was not as we had hoped, but first they gave their own selves to the Lord, and to us through the will of God. So we urged Titus, that as he made a beginning before, so he would also complete in you this grace. But as you abound in everything, in faith, utterance, knowledge, all earnestness, and in your love to us, see that you also abound in this grace. I speak not by way of commandment, but as proving through the earnestness of others the sincerity also of your love. For you know the grace of our Lord Jesus Christ, that, though he was rich, yet for your sakes he became poor, that you through his poverty might become rich.

2 Corinthians 8 [10.] I give a judgment in this: for this is expedient for you, who were the first to start a year ago, not only to do, but also to be willing. But now complete the doing also, that as there was the readiness to be willing, so there may be the completion also out of your ability. For if the readiness is there, it is acceptable according to what you have, not according to what you don’t have. For this is not that others may be eased and you distressed, but for equality. Your abundance at this present time supplies their lack, that their abundance also may become a supply for your lack; that there may be equality. As it is written, “He who gathered much had nothing left over, and he who gathered little had no lack.”[a]


plenty
PIB Scriptures are derived from the World English Bible 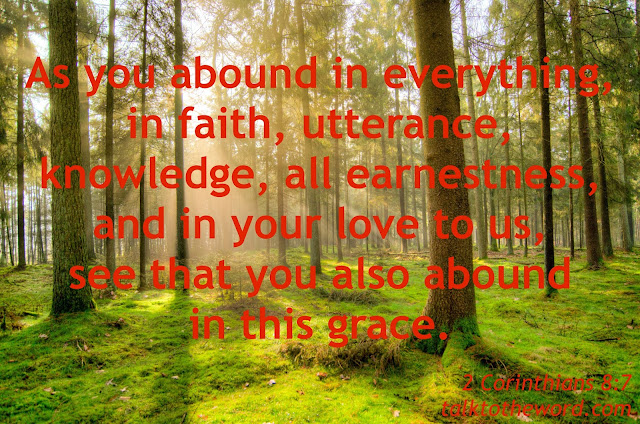