anyone doesn’t provide for his own, and especially his own household, he has denied the faith, and is worse than an unbeliever. 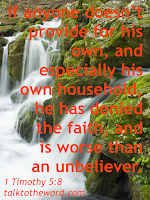 1 Timothy 5 [1.] Don’t rebuke an older man, but exhort him as a father; the younger men as brothers; the elder women as mothers; the younger as sisters, in all purity. Honor widows who are widows indeed. But if any widow has children or grandchildren, let them learn first to show piety towards their own family, and to repay their parents, for this is [a] acceptable in the sight of God.

1 Timothy 5 [5.] Now she who is a widow indeed, and desolate, has her hope set on God, and continues in petitions and prayers night and day. But she who gives herself to pleasure is dead while she lives. Also command these things, that they may be without reproach. But if anyone doesn’t provide for his own, and especially his own household, he has denied the faith, and is worse than an unbeliever. Let no one be enrolled as a widow under sixty years old, having been the wife of one man, being approved by good works, if she has brought up children, if she has been hospitable to strangers, if she has washed the saints’ feet, if she has relieved the afflicted, and if she has diligently followed every good work.

1 Timothy 5 [11.] But refuse younger widows, for when they have grown wanton against Christ, they desire to marry; having condemnation, because they have rejected their first pledge. Besides, they also learn to be idle, going about from house to house. Not only idle, but also gossips and busybodies, saying things which they ought not. I desire therefore that the younger widows marry, bear children, rule the household, and give no occasion to the adversary for insulting. For already some have turned aside after Satan. If any man or woman who believes has widows, let them relieve them, and don’t let the assembly be burdened; that it might relieve those who are widows indeed.


negative
PIB Scriptures are derived from the World English Bible 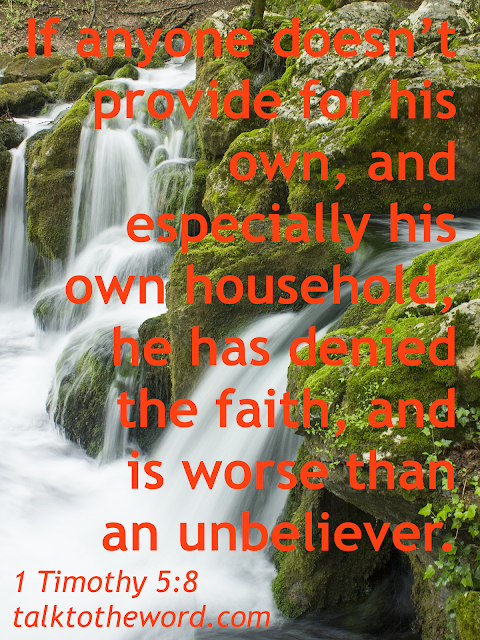