said to David, “Go in peace, because we have both sworn in Yahweh’s name, saying, ‘Yahweh is between me and you, and between my offspring and your offspring, forever.’”

1 Samuel 20 [33.] Saul cast his spear at him to strike him. By this Jonathan knew that his father was determined to put David to death. So Jonathan arose from the table in fierce anger, and ate no food the second day of the month; for he was grieved for David, because his father had treated him shamefully. In the morning, Jonathan went out into the field at the time appointed with David, and a little boy with him. He said to his boy, “Run, find now the arrows which I shoot.” As the boy ran, he shot an arrow beyond him. When the boy had come to the place of the arrow which Jonathan had shot, Jonathan cried after the boy, and said, “Isn’t the arrow beyond you?” Jonathan cried after the boy, “Go fast! Hurry! Don’t delay!” Jonathan’s boy gathered up the arrows, and came to his master. But the boy didn’t know anything. Only Jonathan and David knew the matter. Jonathan gave his weapons to his boy, and said to him, “Go, carry them to the city.”

1 Samuel 20 [41.] As soon as the boy was gone, David arose out of the south, and fell on his face to the ground, and bowed himself three times. They kissed one another, and wept one with another, and David wept the most. Jonathan said to David, “Go in peace, because we have both sworn in Yahweh’s name, saying, ‘Yahweh is between me and you, and between my offspring[a] and your offspring,[b] forever.’” He arose and departed; and Jonathan went into the city.

1 Samuel 21 [1.] Then David came to Nob to Ahimelech the priest. Ahimelech came to meet David trembling, and said to him, “Why are you alone, and no man with you?” David said to Ahimelech the priest, “The king has commanded me to do something, and has said to me, ‘Let no one know anything about the business about which I send you, and what I have commanded you. I have sent the young men to a certain place.’ Now therefore what is under your hand? Please give me five loaves of bread in my hand, or whatever is available.”

1 Samuel 21 [4.] The priest answered David, and said, “I have no common bread, but there is holy bread; if only the young men have kept themselves from women.”

1 Samuel 21 [5.] David answered the priest, and said to him, “Truly, women have been kept from us as usual these three days. When I came out, the vessels of the young men were holy, though it was only a common journey. How much more then today shall their vessels be holy?” So the priest gave him holy bread; for there was no bread there but the show bread that was taken from before Yahweh, to put hot bread in the day when it was taken away.


fellowship
PIB Scriptures are derived from the World English Bible 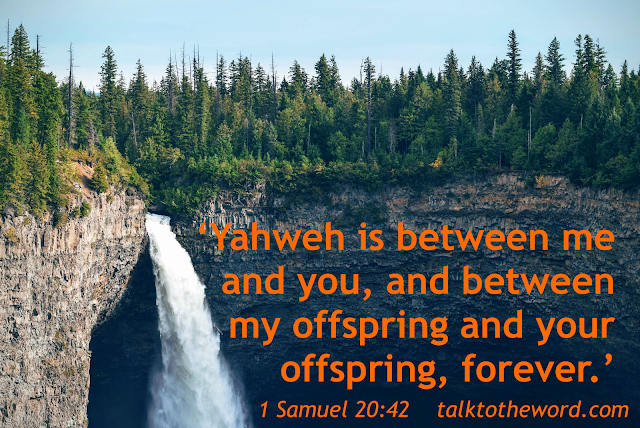