behaved himself wisely in all his ways; and Yahweh was with him.

1 Samuel 18 [8.] Saul was very angry, and this saying displeased him. He said, “They have ascribed to David ten thousands, and to me they have ascribed only thousands. What can he have more but the kingdom?” Saul watched David from that day and forward. On the next day, an evil spirit from God came mightily on Saul, and he prophesied in the middle of the house. David played with his hand, as he did day by day. Saul had his spear in his hand; and Saul threw the spear, for he said, “I will pin David even to the wall!” David escaped from his presence twice. Saul was afraid of David, because Yahweh was with him, and had departed from Saul. Therefore Saul removed him from his presence, and made him his captain over a thousand; and he went out and came in before the people.

1 Samuel 18 [14.] David behaved himself wisely in all his ways; and Yahweh was with him. When Saul saw that he behaved himself very wisely, he stood in awe of him. But all Israel and Judah loved David; for he went out and came in before them. Saul said to David, “Behold, my elder daughter Merab, I will give her to you as wife. Only be valiant for me, and fight Yahweh’s battles.” For Saul said, “Don’t let my hand be on him, but let the hand of the Philistines be on him.” David said to Saul, “Who am I, and what is my life, or my father’s family in Israel, that I should be son-in-law to the king?”


behavior
PIB Scriptures are derived from the World English Bible 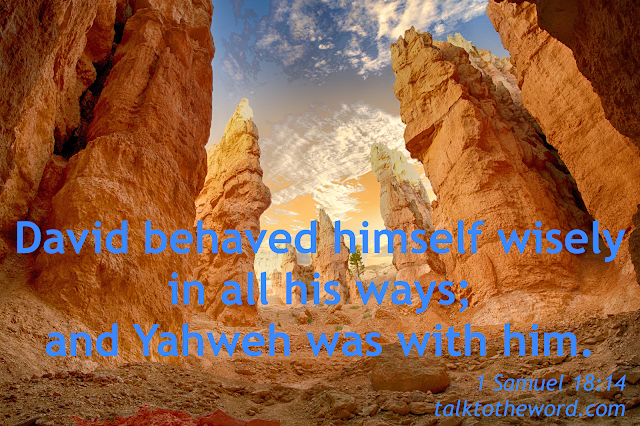