fear Yahweh, and serve him in truth with all your heart; for consider what great things he has done for you.

1 Samuel 12 [19.] All the people said to Samuel, “Pray for your servants to Yahweh your God, that we not die; for we have added to all our sins this evil, to ask for a king.”

1 Samuel 12 [20.] Samuel said to the people, “Don’t be afraid. You have indeed done all this evil; yet don’t turn aside from following Yahweh, but serve Yahweh with all your heart. Don’t turn aside to go after vain things which can’t profit or deliver, for they are vain. For Yahweh will not forsake his people for his great name’s sake, because it has pleased Yahweh to make you a people for himself. Moreover as for me, far be it from me that I should sin against Yahweh in ceasing to pray for you: but I will instruct you in the good and the right way. Only fear Yahweh, and serve him in truth with all your heart; for consider what great things he has done for you. But if you keep doing evil, you will be consumed, both you and your king.”

1 Samuel 13 [1.] Saul was thirty years old when he became king, and he reigned over Israel forty-two years.[a] Saul chose for himself three thousand men of Israel, of which two thousand were with Saul in Michmash and in the Mount of Bethel, and one thousand were with Jonathan in Gibeah of Benjamin. He sent the rest of the people to their own tents. Jonathan struck the garrison of the Philistines that was in Geba: and the Philistines heard of it. Saul blew the trumpet throughout all the land, saying, “Let the Hebrews hear!” All Israel heard that Saul had struck the garrison of the Philistines, and also that Israel was had in abomination with the Philistines. The people were gathered together after Saul to Gilgal.


venerate
PIB Scriptures are derived from the World English Bible 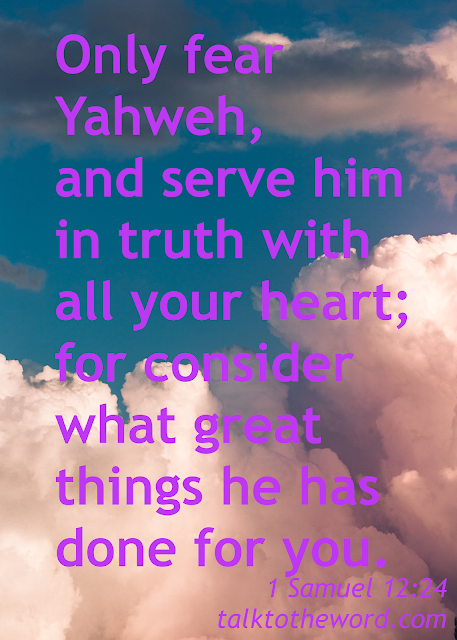