let him who puts on his armor brag like he who takes it off.

1 Kings 20 [1.] Ben Hadad the king of Syria gathered all his army together; and there were thirty-two kings with him, with horses and chariots. He went up and besieged Samaria, and fought against it. He sent messengers to Ahab king of Israel, into the city, and said to him, “Thus says Ben Hadad, ‘Your silver and your gold is mine. Your wives also and your children, even the best, are mine.’”

1 Kings 20 [5.] The messengers came again, and said, “Ben Hadad says, ‘I sent indeed to you, saying, “You shall deliver me your silver, and your gold, and your wives, and your children; but I will send my servants to you tomorrow about this time, and they will search your house, and the houses of your servants; whatever is pleasant in your eyes, they will put it in their hand, and take it away.”’”

1 Kings 20 [7.] Then the king of Israel called all the elders of the land, and said, “Please notice how this man seeks mischief; for he sent to me for my wives, and for my children, and for my silver, and for my gold; and I didn’t deny him.”

1 Kings 20 [9.] Therefore he said to the messengers of Ben Hadad, “Tell my lord the king, ‘All that you sent for to your servant at the first I will do; but this thing I cannot do.’”

The messengers departed, and brought him back the message. Ben Hadad sent to him, and said, “The gods do so to me, and more also, if the dust of Samaria will be enough for handfuls for all the people who follow me.”

1 Kings 20 [12.] When Ben Hadad heard this message, as he was drinking, he and the kings, in the pavilions, he said to his servants, “Prepare to attack!” They prepared to attack the city.

1 Kings 20 [13.] Behold, a prophet came near to Ahab king of Israel, and said, “Yahweh says, ‘Have you seen all this great multitude? Behold, I will deliver it into your hand today; and you will know that I am Yahweh.’”

He said, “Yahweh says, ‘By the young men of the princes of the provinces.’”


pride
PIB Scriptures are derived from the World English Bible 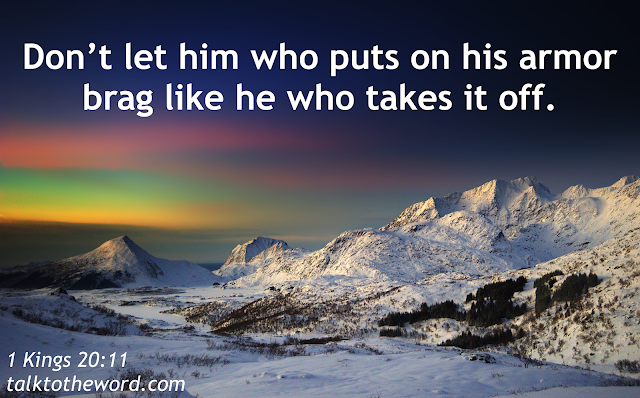