king made of the almug trees pillars for Yahweh’s house, and for the king’s house, harps also and stringed instruments for the singers; no such almug trees came or were seen, to this day.

1 Kings 10 [5.] the food of his table, the sitting of his servants, the attendance of his officials, their clothing, his cup bearers, and his ascent by which he went up to Yahweh’s house; there was no more spirit in her. She said to the king, “It was a true report that I heard in my own land of your acts, and of your wisdom. However I didn’t believe the words until I came and my eyes had seen it. Behold, not even half was told me! Your wisdom and prosperity exceed the fame which I heard. Happy are your men, happy are these your servants, who stand continually before you, who hear your wisdom. Blessed is Yahweh your God, who delighted in you, to set you on the throne of Israel. Because Yahweh loved Israel forever, therefore he made you king, to do justice and righteousness.” She gave the king one hundred twenty talents of gold, and a very great quantity of spices, and precious stones. Never again was there such an abundance of spices as these which the queen of Sheba gave to king Solomon.

1 Kings 10 [11.] The fleet of Hiram that brought gold from Ophir, also brought in from Ophir great quantities of almug trees[a] and precious stones. The king made of the almug trees pillars for Yahweh’s house, and for the king’s house, harps also and stringed instruments for the singers; no such almug trees came or were seen, to this day. King Solomon gave to the queen of Sheba all her desire, whatever she asked, besides that which Solomon gave her of his royal bounty. So she turned and went to her own land, she and her servants. Now the weight of gold that came to Solomon in one year was six hundred sixty-six talents[b] of gold,

1 Kings 10 [15.] besides that which the traders brought, and the traffic of the merchants, and of all the kings of the mixed people, and of the governors of the country. King Solomon made two hundred bucklers of beaten gold; six hundred shekels[c] of gold went to one buckler. he made three hundred shields of beaten gold; three minas[d] of gold went to one shield; and the king put them in the house of the forest of Lebanon. Moreover the king made a great throne of ivory, and overlaid it with the finest gold. There were six steps to the throne, and the top of the throne was round behind; and there were armrests on either side by the place of the seat, and two lions standing beside the armrests.


environment
PIB Scriptures are derived from the World English Bible 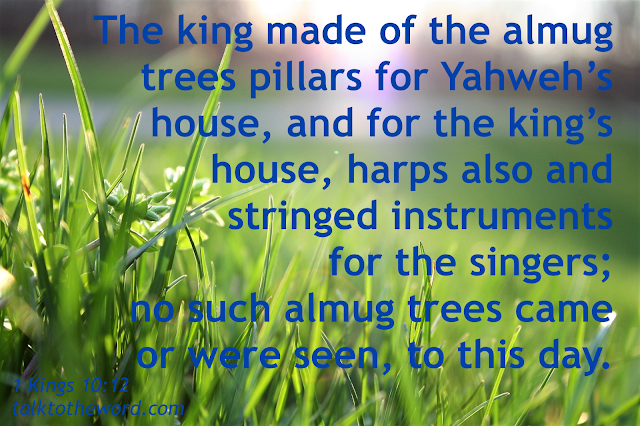