each man stay in that calling in which he was called. 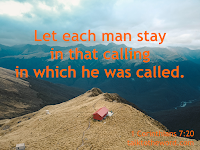 1 Corinthians 7 [12.] But to the rest I—not the Lord—say, if any brother has an unbelieving wife, and she is content to live with him, let him not leave her. The woman who has an unbelieving husband, and he is content to live with her, let her not leave her husband. For the unbelieving husband is sanctified in the wife, and the unbelieving wife is sanctified in the husband. Otherwise your children would be unclean, but now they are holy. Yet if the unbeliever departs, let there be separation. The brother or the sister is not under bondage in such cases, but God has called us in peace. For how do you know, wife, whether you will save your husband? Or how do you know, husband, whether you will save your wife? Only, as the Lord has distributed to each man, as God has called each, so let him walk. So I command in all the assemblies.

1 Corinthians 7 [18.] Was anyone called having been circumcised? Let him not become uncircumcised. Has anyone been called in uncircumcision? Let him not be circumcised. Circumcision is nothing, and uncircumcision is nothing, but the keeping of the commandments of God. Let each man stay in that calling in which he was called. Were you called being a bondservant? Don’t let that bother you, but if you get an opportunity to become free, use it. For he who was called in the Lord being a bondservant is the Lord’s free man. Likewise he who was called being free is Christ’s bondservant. You were bought with a price. Don’t become bondservants of men. Brothers, let each man, in whatever condition he was called, stay in that condition with God.


endurance
PIB Scriptures are derived from the World English Bible 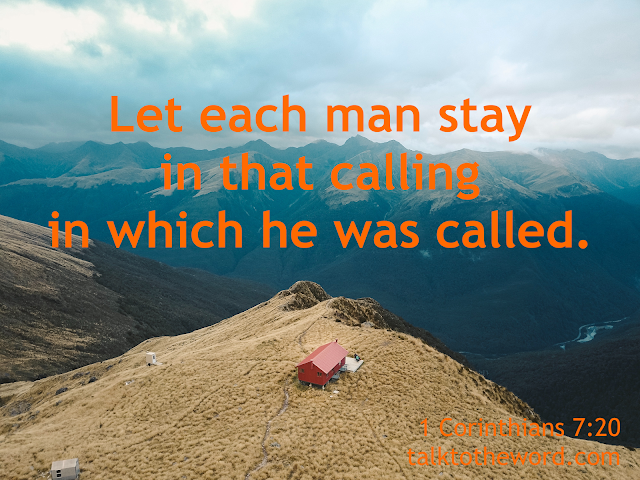