last enemy that will be abolished is death.

1 Corinthians 15 [25.] For he must reign until he has put all his enemies under his feet. The last enemy that will be abolished is death. For, “He put all things in subjection under his feet.”[a] But when he says, “All things are put in subjection”, it is evident that he is excepted who subjected all things to him. When all things have been subjected to him, then the Son will also himself be subjected to him who subjected all things to him, that God may be all in all. Or else what will they do who are baptized for the dead? If the dead aren’t raised at all, why then are they baptized for the dead?

1 Corinthians 15 [30.] Why do we also stand in jeopardy every hour? I affirm, by the boasting in you which I have in Christ Jesus our Lord, I die daily. If I fought with animals at Ephesus for human purposes, what does it profit me? If the dead are not raised, then “let us eat and drink, for tomorrow we die.”[b] Don’t be deceived! “Evil companionships corrupt good morals.” Wake up righteously, and don’t sin, for some have no knowledge of God. I say this to your shame.

1 Corinthians 15 [35.] But someone will say, “How are the dead raised?” and, “With what kind of body do they come?” You foolish one, that which you yourself sow is not made alive unless it dies. That which you sow, you don’t sow the body that will be, but a bare grain, maybe of wheat, or of some other kind. But God gives it a body even as it pleased him, and to each seed a body of its own. All flesh is not the same flesh, but there is one flesh of men, another flesh of animals, another of fish, and another of birds.


enemy
PIB Scriptures are derived from the World English Bible 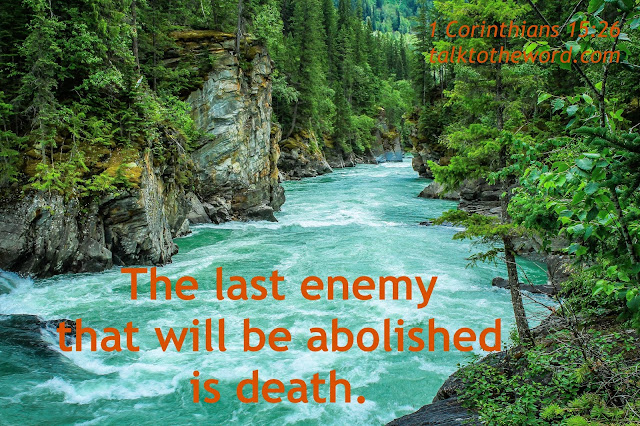