be children in thoughts, yet in malice be babies, but in thoughts be mature.

1 Corinthians 14 [15.] What is it then? I will pray with the spirit, and I will pray with the understanding also. I will sing with the spirit, and I will sing with the understanding also. Otherwise if you bless with the spirit, how will he who fills the place of the unlearned say the “Amen” at your giving of thanks, seeing he doesn’t know what you say? For you most certainly give thanks well, but the other person is not built up. I thank my God, I speak with other languages more than you all. However in the assembly I would rather speak five words with my understanding, that I might instruct others also, than ten thousand words in another language.

1 Corinthians 14 [20.] Brothers, don’t be children in thoughts, yet in malice be babies, but in thoughts be mature. In the law it is written, “By men of strange languages and by the lips of strangers I will speak to this people. Not even thus will they hear me, says the Lord.”[b] Therefore other languages are for a sign, not to those who believe, but to the unbelieving; but prophesying is for a sign, not to the unbelieving, but to those who believe. If therefore the whole assembly is assembled together and all speak with other languages, and unlearned or unbelieving people come in, won’t they say that you are crazy? But if all prophesy, and someone unbelieving or unlearned comes in, he is reproved by all, and he is judged by all. And thus the secrets of his heart are revealed. So he will fall down on his face and worship God, declaring that God is among you indeed.

1 Corinthians 14 [26.] What is it then, brothers? When you come together, each one of you has a psalm, has a teaching, has a revelation, has another language, has an interpretation. Let all things be done to build each other up. If any man speaks in another language, let it be two, or at the most three, and in turn; and let one interpret. But if there is no interpreter, let him keep silent in the assembly, and let him speak to himself, and to God. Let the prophets speak, two or three, and let the others discern.


juvenile
PIB Scriptures are derived from the World English Bible 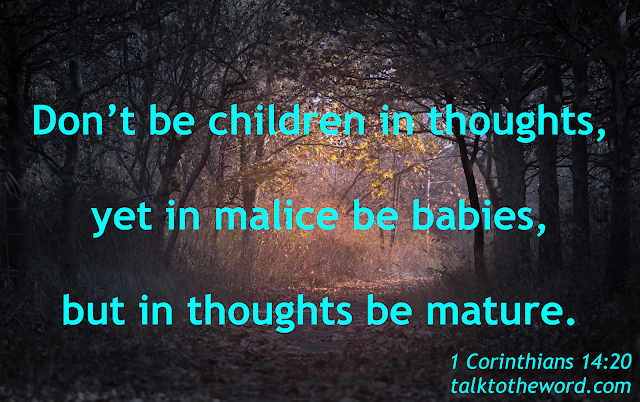